If you are reading this on a computer, you are probably part of the Brazilian population with access to electricity at home or work. While we live in the era of the Fourth Industrial Revolution, where the internet is deeply engrained in our daily lives, 990,103 Brazilians don’t have electricity in the Legal Amazon. They don’t even have an outlet to plug in a refrigerator. That data is part of an unprecedented analysis carried out by Instituto de Energia e Meio Ambiente (IEMA), which points out the places where Brazilians live without public electricity in the region. The organization developed a georeferenced analytical methodology to estimate and monitor the evolution of that number in different territorial demarcations and population classes, such as indigenous peoples, extractivists, quilombolas, and settlers.

“With the results of that work, it is possible to plan the volume of resources needed to fix the problem, how long it would take to achieve the universalization of electricity in the Amazon, and how to go beyond access to electricity for social welfare by also promoting productive community activities,” explained Pedro Bara, senior researcher at IEMA.

For example, the study allowed researchers to estimate that 19% of the population living in Indigenous Lands in the Amazon has no access to electricity. For the population living in protected areas, that number reaches 22%, and for rural settlements, it is 10%. With that information, it is possible to elaborate specific policies for each case, respecting the sociocultural characteristics of diverse communities and seeking to use the most appropriate technologies for different locations.

Where are the people without electricity 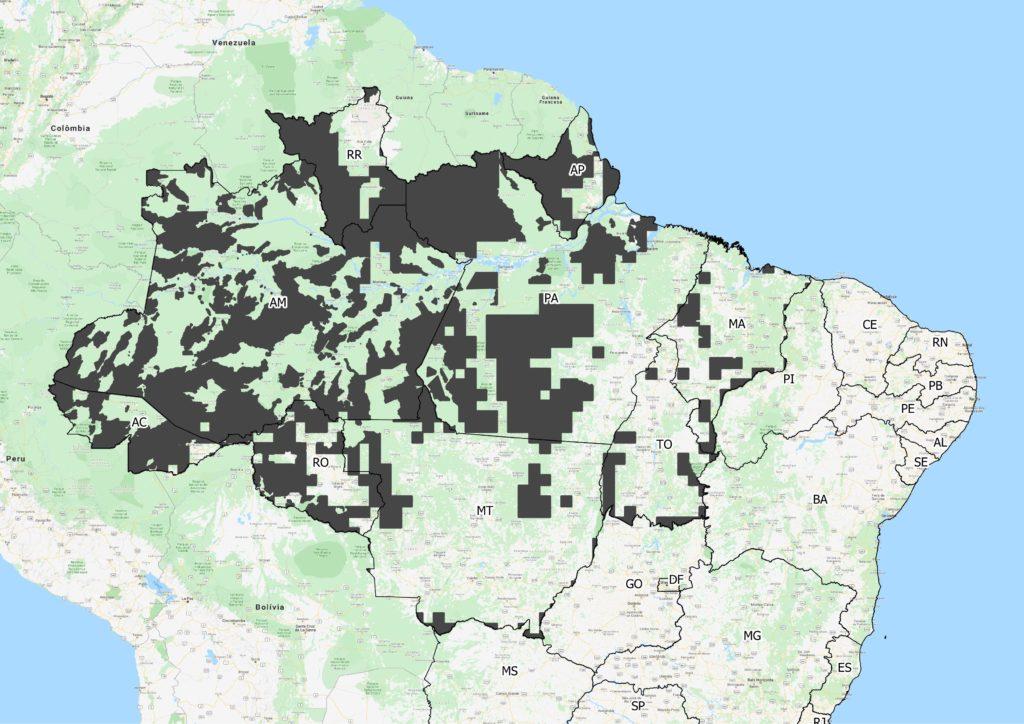 In grey, the territory that lacks electricity

Before the study carried out by IEMA, there was no georeferenced and updated data set that would allow monitoring the evolution of service with different territorial cuts. The 2010 Demographic Census of the Brazilian Institute of Geography and Statistics (IBGE) was the only database available. It included access to electricity as one of the questions in its basic questionnaire. Still, it is outdated because it leaves out the power connections implemented in the last nine years. In addition, such information will no longer be part of the questionnaire to be used in the 2020 Census.

Finally, the power distributors responsible for each state have estimates in their universalization plans for their concession areas. Still, they are not always easily accessible and lack transparency about their methodology. “According to the power distributors, field surveys are very costly and time-consuming, especially for communities in remote areas. Thus, estimates like ours become an important option, especially in the planning phase,” explained Camila Cardoso, IEMA researcher.

What does the methodology developed by IEMA look like

The methodology developed by IEMA aims to fill the gap of updated public data on electric power exclusion in the Amazon. The estimate was calculated considering data related to the existing infrastructure, which allows its update whenever the databases are updated. The methodology developed estimates the location of the population already served and, from that result, infers the population not served yet by electricity. For that, the analysis was divided into two stages:

The areas excluded in the described process and the corresponding population were considered as not served by public electricity. The population data used are from the IBGE’s Census 2010, updated based on the annual population estimates by the municipality, also prepared by IBGE.

See the presentation about the work. The data may change until the publication of the study.

Organizations for electrical energy in the Amazon

IEMA is part of a network of institutions that discusses solutions to the obstacles to universal access to electricity. The network includes ABSOLAR, Charles Stewart Mott Foundation, COIAB, National Council of Extractive Populations, Energia para a Vida, FOIRN, Greenpeace, Instituto Clima e Sociedade, IEE-USP, Instituto Saúde e Alegria, Instituto Socioambiental, and WWF. In April 2019, the network published an open letter called “Open Letter of the Energy & Communities Fair and Symposium, energy solutions for communities in the Amazon” with recommendations to solve the problem of electric power exclusion in remote communities in the Amazon.

Among the topics addressed in the letter, there was the urgent need to map communities and populations that do not yet have access to electricity in remote regions of the Amazon, generating a complete and updated number by states and municipalities; and the need for coordination and collaboration between actors from different areas to overcome the challenges to universalization.

The IEMA estimate contributes to overcoming the obstacles pointed out by the network by proposing an updated mapping methodology of electric power exclusion. In addition, the Institute aims to coordinate the use of that methodology with the network and with public and private sector decision-makers by providing a reference tool, which, complementary to field surveys, allows monitoring the evolution of the service. Such a tool would also help solve the problem by allowing the analysis of priority regions and territorial demarcations for the service.

It is interesting to note that there may be people or communities who do not want access to electricity, and their wishes must be respected. However, it is worth highlighting that those who would like to have electricity, but lack access to it, face significant difficulties daily. “Access to electricity has an outstanding impact on the quality of life of communities, as it can allow the expansion of productive activities, in addition to bringing benefits such as cooling of vaccines, medicines, and food; pumping drinking water; lighting for night study; and use of computers in schools, to name a few,” explained Vinicius de Sousa, IEMA researcher.

See on the table where people without electricity live in the Legal Amazon: